Crisis Messenger
The Mix / Sex & Relationships / Abortion / What are the new abortion laws in Northern Ireland?

What are the new abortion laws in Northern Ireland?

Last week, on 22nd October, abortion was decriminalised for the first time in Northern Ireland and you might be wondering why this has happened and what it all means.

How has the law on abortion changed?

Previously, those who wanted to have an abortion had to cross the Irish Sea to England and Wales, to do so without facing criminal charges.

From March 2020 onwards, when the law comes into effect, abortion will be legal and women and girls in Northern Ireland will have the right to end a pregnancy without being prosecuted.

Why was abortion illegal in Northern Ireland?

There are many people in Northern Ireland who believe that abortion is wrong and have worked to stop the law from being changed.

These people range from politicians in parties such as the Democratic Unionist party (DUP), to Pro-Life activists, who campaign against abortion rights. Either for religious reasons or otherwise, those who are anti-abortion believe that women and girls shouldn’t have the right to end their pregnancy.

Before the law was changed, abortion was only legal in exceptional cases, where it was believed that the person’s life was is in danger, or that the pregnancy would be a great risk to their physical or mental health.

Who did this affect?

In 2018, 1,053 women and girls travelled to England and Wales from Northern Ireland seeking legal abortions. This is often a traumatic process and many who go through it feel anxious and scared by the journey; sometimes done in secret without their family or friends knowing.

Some women who can’t travel at all take the risk of ordering abortion pills, which are available via your doctor in England and Wales, but illegal to order online. 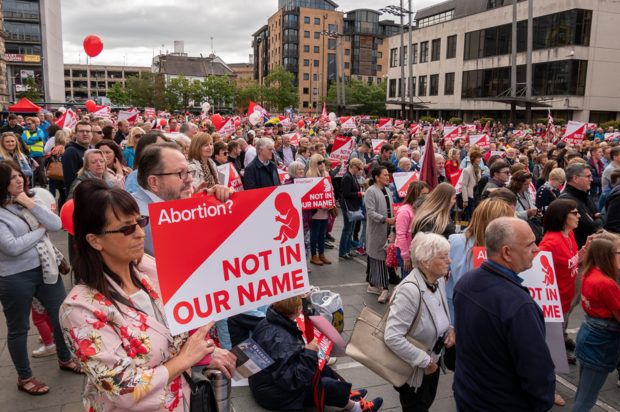 Who campaigned for the law to change?

Abortion has been legal in England, Scotland and Wales since 1967, when the Abortion Act made termination legal up to 24 weeks into pregnancy. Activists have been campaigning to extend the same rights to Northern Irish women.

Many feminist campaign groups, Pro-Choice activists and politicians such as the Labour MP, Stella Creasy, believe that women and girls should have the right to decide whether they want to have an abortion.

Activists argue that anti-abortion laws stop women from having control over their own bodies and contradict all the progress that has been fought for by the women’s rights movement.

Why has the law on abortion changed?

Changing the law on abortion has been very difficult for a long time, because there has been so much resistance from opposing groups as well as those in power.

The government in Northern Ireland has been suspended since 2017 because of ongoing disagreements between the DUP and Sinn Fein. Because of this, Westminster were able to push through the law because the suspended government didn’t return to stop it.

This means that although the law has been changed, there are still many people in the government who oppose it.

What does this mean if I live in Northern Ireland?

What if I need an abortion before the law changes?

If you need an abortion before April and you live in Northern Ireland, you’ll still need to travel to England or Wales. However, treatment will be free of charge and you may also be able to get funding for your travel and accommodation.

You can book your appointment through one central booking number: 0333 234 2184. Head to gov.uk for the most up to date information.

I’m worried about making the journey…

If you are facing this journey and need support, we’re here for you. Making a decision to have an abortion can be difficult and scary and you don’t need to do it alone. If you can, confide in a friend or family member, or someone else you trust so they can help you through the process.

Take a look at our articles on the abortion procedure and dealing with an abortion. You can also contact our support services to speak to one of our trained team of experts. Organisations such as Brook and BPAS also offer advice and support and have lots of information on abortion.

Struggling to quit smoking while pregnant: A true story

Melissa had to give up smoking for the good of her ...

If you haven’t planned for a baby, discovering ...

How late can you have an abortion? UK abortion law explained

When can you legally have a termination?

Dealing with an abortion

The emotional ups and downs, and how to cope with ...

How to go down on a girl

What's the white stuff under my foreskin?

I've got a white substance under my foreskin, can you tell m...