Crisis Messenger
The Mix / I tried VR therapy for my anxiety

I tried VR therapy for my anxiety

In the new BBC Three Documentary 'Can Robots Love us?', Rochelle, 25, tried VR to tackle her fear of being trapped. Here's what she learnt from the experience.

A few months ago I was given the exciting opportunity to try virtual reality therapy for my anxiety condition as part of a new BBC Three documentary exploring the relationship between humans and technology. With the help of therapist Michael Carthy, stepping into a virtual reality tube simulation would mean taking myself to a place I’ve been avoiding since 2013 after getting stuck on an underground train.

My cleithrophobia (fear of being trapped) has taken over my life and I’ve been avoiding everything from public transport to lifts. Could this new technique give me the chance to get back to normality and finally put my irrational fears to rest?

Here are a few things that I learnt from my time in a virtual world.

It’s more realistic than you think

A lot of people have said to me ‘well it doesn’t look real’ and ‘it must be in the back of your mind that it’s not real’. I was really worried about this too, but once you’re in the simulation it’s different. Your senses are immersed in the experience, and the techniques used by Michael cement the new reality. He asks you to describe what you are seeing every so often and you even walk through the long tunnels to get to the platform which increases my anxiety in the same way walking through a normal tube station would affect me. 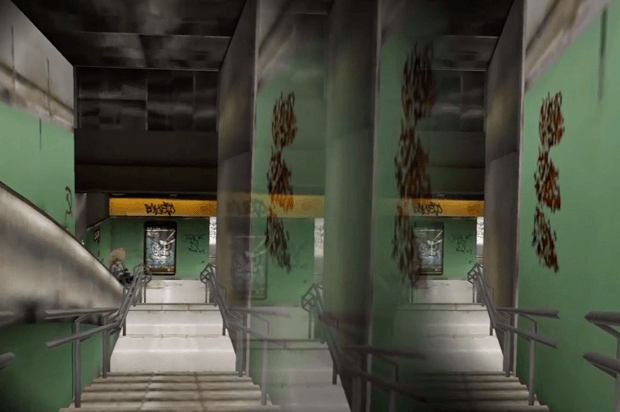 Before I entered the virtual reality, Michael taught me some strategies to help cope with the fear I would face, including breathing and positive thinking techniques. I was able to put these into practice in a safe environment where I could bail out if I needed to by taking the headset off. Having that safety net meant I was confident enough to push myself further and be braver. My first attempt resulted in me staying in the broken-down tube for more than five minutes.

It had a radical effect on my condition

Right after my first therapy session, I stepped into a lift for the first time in more than three years. By the third session, Michael took me on a real tube and in the weeks following, I conquered four stops on the northern line alone.

Not a miracle cure

I was shocked at how quickly the therapy made a difference, but I’m not selling it to you as a new miracle cure. I’m still not where I used to be before my condition started to really affect me but I’m working at it, slowly but surely. I’m now getting in lifts whenever I can and some situations that would have made me anxious before have now been a lot easier to cope with.

It probably won’t work for everyone

The software is new and there are only certain phobia simulations available right now, such as tubes, lifts and public speaking. Other simulations are being developed but it’s probably not suitable for all anxiety sufferers right now. Mental health treatment is complex and everyone reacts to it differently.

More research could pave the way

The documentary also looks at a new app where therapy bots can discuss your feelings like a human therapist would. My therapist used a smartphone, a VR Gear headset and some headphones that you could buy on the high street. Technology advances so quickly these days and devices are so cheap. With more research could we soon be self-treating our mental health issues with smartphones? With services becoming more strained, this could be a welcome relief to the NHS with the potential for amazing success stories like mine.

Watch Can Robots Love Us? on BBC Three on iPlayer or on YouTube now.

Should sufferers of alcohol addiction be eligible for liver ...
My summer at The Mix
Comments by Vanilla

My #SummerUnfiltered at The Mix

Our intern Raya shares her #summerunfiltered ...

A community coming of age

This volunteer’s week, we want to celebrate ...

How to overcome digital challenges facing the youth sector