Crisis Messenger
The Mix / Panic attacks are a monster of a problem for young people, but you don’t have to be under X-Factor pressure to experience them, says YouthNet

Panic attacks are a monster of a problem for young people, but you don’t have to be under X-Factor pressure to experience them, says YouthNet 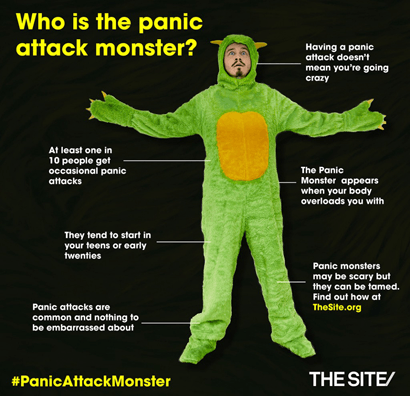 In the past week alone, it’s been reported that X-Factor contestant Helen Fulthorpe has had a suspected panic attack, while schoolboy Charlie has bravely spoken out

about his panic attacks on Channel 4’s Educating the East End. Fashion blogger Zoella has also revealed she has them. Yet despite the headlines, panic attacks are commonly misunderstood. The reality is they can happen to anyone, anytime, anywhere and you don’t have to be under X-Factor type pressure to experience them.

YouthNet, which is the charity behind digital life-line TheSite, has created a series of 30 second videos starring The Panic Attack Monster – a fictional character who represents how it feels to have a panic attack.

Panic attacks are experienced by a third of young women and one in ten young men in the UK.* Despite this, panic attacks are widely misunderstood. Many young people who have panic attacks don’t fully understand what they are experiencing or where to get advice on how to cope with them. They can often feel they aren’t being taken seriously and feel stigmatised.

Panic attacks are severe attacks of anxiety and fear that often come on without warning and can last up to 20 minutes.  They cause a number of symptoms such as a pounding heart, sweating, shaking, elevated pulse, and an intense feeling of needing to catch a breath.  Panic attacks can even make you think you’re about to die, though you’re not actually in any danger.

The Panic Attack Monster character in the campaign is an unpleasant character in a green furry suit with demonic horns.  He can attack any time, but everyday scenarios depicted in the campaign, include: being in a contained space such as a lift, being at the cinema, and social situations like approaching someone you don’t know in a bar.

YouthNet Chief Executive, Emma Thomas, says: “You don’t have to be under X-Factor pressure to experience a panic attack, they are commonly experienced in ordinary, everyday situations. Yet young people who come to TheSite seeking support, often tell us they don’t want to admit they experience panic attacks for fear they’ll be misunderstood by their family and friends. Many say they are worried they are ‘going crazy’ and feel very isolated as a result. We know that young men in particular, are less likely to open up about having panic attacks.

“We hope that through using humour in our Panic Attack Monster campaign, we can get more young people talking about panic attacks and begin to reduce the stigma surrounding them. We can’t stop young people from experiencing the terror of panic attacks, but we want them to understand them better, so they can seek the support and advice they need.

The Panic Attack Monster campaign is at home on YouTube. There are four thirty second adverts being released over the next three weeks.

To visit The Panic Attack Monster, please go to: www.TheSite.org/PanicAttackMonster

You can further support the campaign by signing up to our social Thunderclap – to help young people tame the Panic Attack Monster – and break down the taboos surrounding him:

YouthNet is the charity behind online guide to life, TheSite, which supports around 1 million 16 to 25 year olds in the UK each year.

YouthNet has developed a range of complementary digital services to support young people:

YouthNet, together with O2, launches ‘digital mate’ to m...
Digital charity YouthNet announces the appointment of a new ...
Comments by Vanilla

Welcoming Skill Up! to The Mix

The youth sector states how the EU referendum result ...

Q. Which industry raised over £50K at a quiz-night, to support under 25s?

The Duke and Duchess of Cambridge and Prince Harry ...